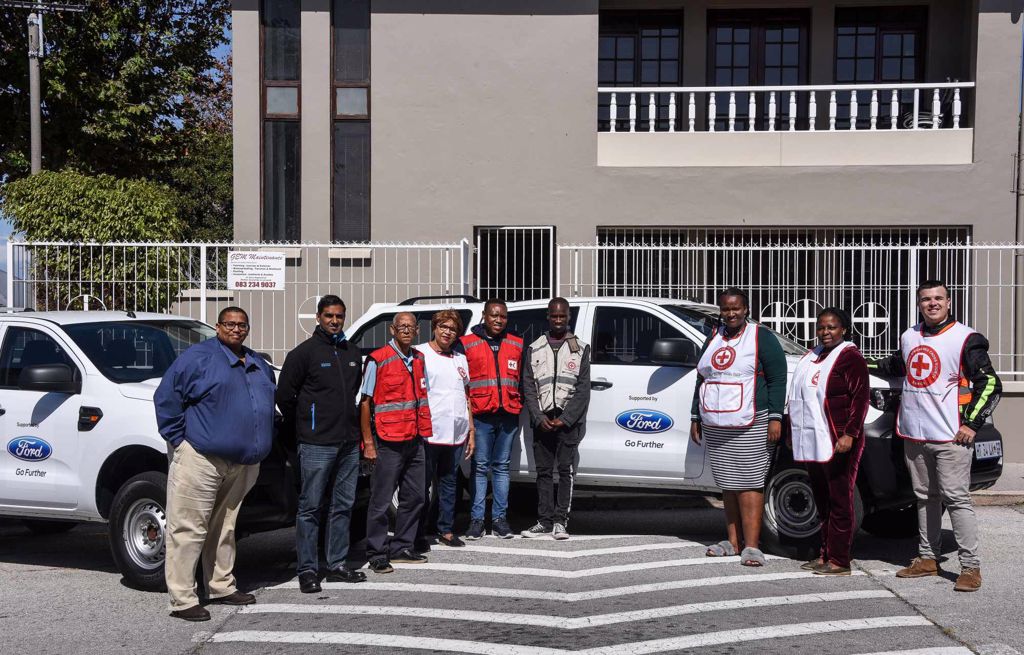 Pretoria, South Africa, 8 May 2020 – Every year, World Red Cross and Red Crescent Day on 8 May celebrates and honours the millions of volunteers and members of the International Federation of Red Cross and Red Crescent Societies (IFRC) around the globe who provide a lifeline to communities in need across 189 countries. In 2020, in the face of the COVID-19 pandemic, any thoughts of celebration have been superseded by the organisation’s selfless commitment to supporting desperate communities, families and individuals directly and indirectly impacted by the coronavirus.

In Nelson Mandela Bay, the South African Red Cross Society, which is a member organisation of the IFRC, has ramped up its humanitarian efforts by distributing food parcels, hot meals and hygiene packs to poor urban and rural communities across the metropole throughout the national lockdown implemented on 27 March.

Its commendable work, under extremely challenging conditions, has been supported by Ford Motor Company of Southern Africa (FMCSA), which provided the Port Elizabeth branch of the SA Red Cross Society with two loan Ford Ranger Double Cabs to use from the start of the lockdown through to the end of May.

“We applaud each and every healthcare worker, essential services provider and volunteer in the amazing work they have done to support communities affected either directly by the COVID-19 virus, or indirectly through a loss of employment and income during the national lockdown,” says Neale Hill, managing director of Ford Motor Company of Southern Africa. “Non-profit organisations such as the South African Red Cross Society have been instrumental in caring for and protecting human life, health and dignity throughout this state of disaster.

“Although World Red Cross and Red Crescent Day in 2020 will be quite different to what these volunteers and members have been used to in previous years, we feel privileged to be supporting the exceptional work of the Port Elizabeth branch of the Red Cross by enabling them to continue helping more people during this crisis,” Hill adds. “We salute their unwavering dedication and commitment to addressing the most critical needs and supporting the most vulnerable members of our communities.”

The Ford Rangers have been instrumental in the non-profit organisation’s humanitarian work. By the first week of May, the SA Red Cross Society had assisted over 5 000 direct beneficiaries, and reached 45 000 people through its COVID-19 education and awareness campaigns.

“Our Red Cross team has relied tremendously on the vehicles provided by Ford, as we don’t have a vehicle in Port Elizabeth,” says Caroline Gallant, SA Red Cross Society Provincial Manager for the Eastern Cape. “We would not have been able to bring the level of relief to communities and support our brave volunteers in the field if it wasn’t for this amazing gesture of providing us with the two bakkies on loan.

“The feedback that we received from some of the more isolated rural communities that we have reached as a result of having vehicles to get there has been overwhelming,” Gallant adds. “When someone tells you, they thought people had forgotten about them and the donations put food into an empty cupboard, you cannot help but be thankful for all the resources that you have in order to do your job. The two Ford Rangers are definitely among of our most critical resources at this time.”

From the collection of donations from various companies and individuals to assisting with the delivery of food parcels in and around the Nelson Mandela Bay Municipality and the Kouga Local Municipality, thousands of people have received much-needed relief from the local Red Cross team. To date, the Red Cross team has distributed personal protective equipment (PPE) and conducted COVID-19 screening at 230 households, delivered 780 hygiene kits, served 3 843 hot meals from the load bays of the Ford Rangers at shelters, town halls and informal settlements, and handed out almost 5 000 food parcels to poor families, residents of old age homes and children’s havens.

The SA Red Cross Society is continuing its relief efforts during the current Stage 4 of the national lockdown, with the two Ford Rangers ensuring that its teams remain mobile and able to respond to the most critical needs throughout May.

History of the Red Cross

The Federation supports humanitarian activities by Red Cross in each country, including providing emergency relief for natural disasters, the development of new social welfare initiatives, caring for refugees and simply caring for the vulnerable in society. (Source, Quickpic)