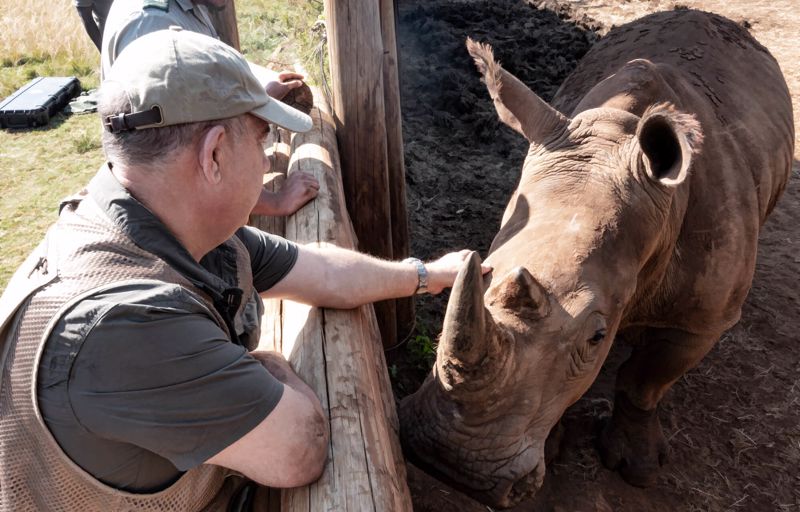 Rangers and Rhinos Work Together In The African Reserves

While the colossal impact of COVID-19 threatens to break down the tourism industry, it has not dampened the spirits and heroic efforts of those who continue to devote every hour of each day determined to help the preservation of these animals and habitats, including the endangered Rhinoceros, on this Save the Rhino Day, 1st May.

One rhino that wouldn’t be with us today had it not been for the help of the Ford Wildlife Foundation (FWF), is a young cow named Kelly. Kelly was shot through the shoulder and the bullet’s erratic course eventually lodged itself in the trachea. The Ford Rangers, supplied by the Ford Wildlife Foundation, got Saving the Survivors to the scene quickly, treating the rhino with antibiotics as well as cleaning the gunshot wound. After deciding that an endoscopy would be too risky, Kelly was transported to a boma and monitored for the next 4 weeks. During her next examination, the team were pleasantly surprised to see that the body had sealed off the bullet, and that the trachea had healed.

Thanks to Saving the Survivors, Kelly’s recovery is going well, and those involved in the rehabilitation have coined the nickname “animal ambulance” for the Ford Ranger.

“For 30 years, Ford has supported environmental education, research, and conservation projects around sub-Saharan Africa and in 2014 we established the FWF” says Lynda du Plessis, FWF Project Manager. “Instead of monetary donations, we assist our partner organisations through the sponsorship of Ford Ranger 4x4 double cabs so that they are equipped to carry out their work with speed, agility and a full suite of emergency gear.”

The Black Rhino Range Expansion Project (BRREP) is also prospering alongside the FWF as a mobility partner. BRREP aims to increase the range and numbers of black rhino in the country, reaching the national target of 3,000. In the 17 years of the BRREP’s existence, 216 black rhino have been captured and moved to new homes and 13 new black rhino populations have been created on land that is either private, community- or government-owned or a combination of the three.

It is the Ranger’s formidable toughness that enables the STS and BRREP to reach destinations in the heart of the African bushveld, and often on a direct course to stricken animals in desperate need of assistance. The 25 Ford Rangers work endlessly around the clock in 24 different locations, including Mozambique and Namibia, and have been referred to as the most important piece of equipment able to operate on numerous projects in fauna and flora.

Making a difference to conservation also extends to visiting and educating communities. This grass roots approach has inspired many keen individuals to reach a level of qualification which has then opened up doors in the tourism industry as a rewarding career choice. Performing new research is another tenet in understanding the evolving threats to the animal species, often helping to reconcile conflict between humans and animals as territories merge. Academics doing their PhDs in conservation contribute significantly to these research pages.

“In terms of rhino conservation in particular, we are extremely proud to be associated with the World Wide Fund for Nature South Africa’s (WWF-SA) Black Rhino Range Expansion Project (BRREP), and the Saving the Survivors conservation project,” says du Plessis. “We remain committed to Ford’s brand promise to #GoFurther – to do what we can, with what we have, to build a more sustainable future for all,” concludes du Plessis.