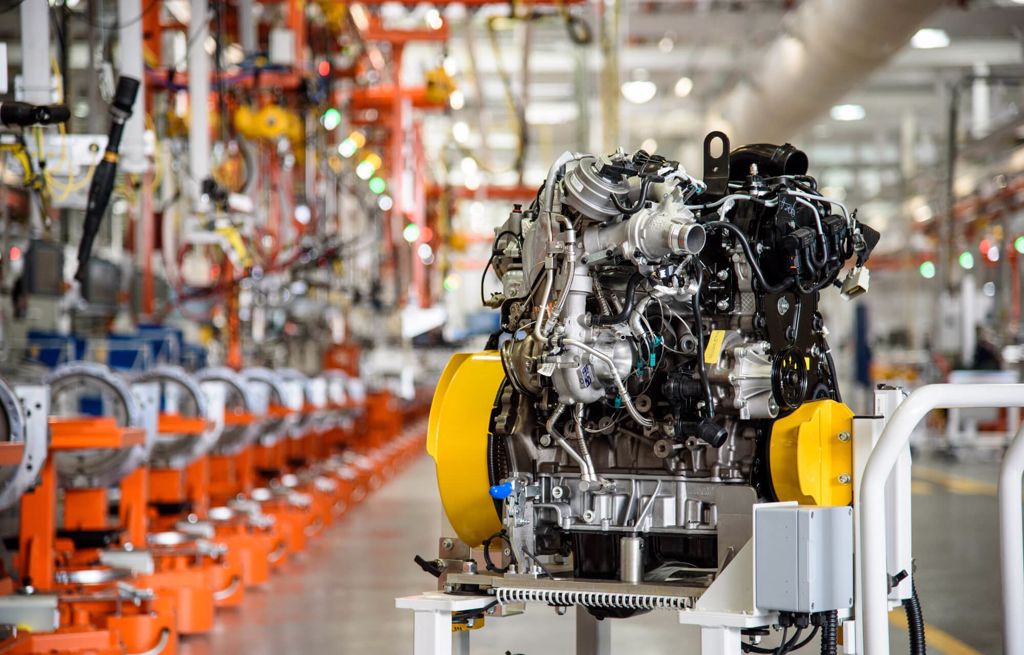 The introduction of the new diesel engine programme followed an investment of R3-billion in Ford’s South African operations at the Struandale Engine Plant and the Silverton Assembly Plant in Pretoria, announced in 2017.

A 3 868m2 assembly hall was built for the new engine programme, which produces a total of nine derivatives of the 2.0-litre turbodiesel units. This facility has an installed capacity to produce up to 120 000 engines per year, and currently runs two shifts, five days per week, assembling 320 engines per day – or one engine every 134 seconds. The assembly line is 312 metres long with 110 stations and 96 operators per shift.

The sub-assembly line for the cylinder head features four automated robotic stations that ensure maximum precision in the fitment of parts. Four more robotic stations on the main assembly line apply the room temperature vulcanising (RTV) silicone gaskets on key components, such as the cylinder head, tappet cover and oil pan, with each operation monitored by integrated camera inspection systems that guarantee the highest levels of precision and quality control.

“Throughout the line we have extensive error-proofing and traceability mechanisms in place with multiple camera and transponder systems, ensuring that every step of the assembly process is tracked and recorded, right down to the tightening of each bolt by individual operators or machines,” Govender explains.

There are two cold-test cells at the end of the assembly line to check operating parameters and pressures of every engine that comes off the line, without starting the engine. A hot-test cell is used at selected intervals to evaluate the integrity and performance of engines during a short running cycle. Additionally, there is a dedicated high-performance engine dynamometer located at the plant to conduct a wide range of performance and durability tests.

New fuel injectors are capable of delivering up to six injections per combustion event, with each injection taking as little as 250 microseconds (0.00025 seconds) and delivering 0.8 mg of diesel – equivalent to a grain of sugar. This tiny volume of fuel is injected through eight conical holes, each of which is 120 microns in diameter (about the width of a human hair).

The all-new compact turbocharger for the 2.0-litre Single Turbo engine has been specifically designed to deliver a high volume of air at low engine speeds, creating a light and urgent feel across the rev range, and up to 340 Nm of torque from as low as 1 250 r/min. The peak 420Nm is available between 1 750 and 2 500 r/min.

Compressor wheels are milled from solid, rather than cast, improving tolerances to within two or three microns – around the size of a single bacterium – which increases durability and reduces noise and vibration. A new turbocharger actuator replaces the traditional worm drive with a geared design that halves response times to 110 milliseconds – or the blink of an eye.

The system is close-coupled to the rear of the engine for maximum efficiency and excellent cold-driving performance. A short-loop exhaust gas recirculation channel is incorporated into the cylinder head, contributing to a more compact engine design and helping optimise cooling of gasses.

The powerful 2.0 Bi-Turbo engine relies on an innovative dual turbocharger system that delivers impressive performance throughout the engine range, offering the ideal balance between low-end torque and high-end power. It uses a small high pressure (HP) turbo connected in series to a large low pressure (LP) turbo, controlled with by-pass valves that determine the operating mode depending on engine speed. At lower engine speeds the two turbos work in series, enhancing torque and responsiveness, while at higher revs the small HP turbo is bypassed, and the larger LP turbo provides boost to deliver top-end power.

To maximise durability, the high-grade alloy turbocharger housing is designed to handle an exhaust temperature of up to 850°C. Turbo bearings and the LP turbo are water-cooled to reduce operating temperatures, avoid over-heating and protect the air induction components. Additionally, the belt-in-oil primary drive has been engineered for reduced friction and noise, lower emissions, and enhanced durability and efficiency. It is maintenance free for the life of the engine.

Significant improvements were achieved in reducing noise, vibration and harshness (NVH) in this engine – with even the engine cover specially designed with noise-absorbing foam.

A key feature of Ford’s Struandale Engine Plant since 2011 has been the component machining and engine assembly for the 2.2 and 3.2-litre Duratorq TDCi engines that are used in selected Ford Ranger and Everest models, and supplied to customer plants around the world.

With an installed capacity for up to 130 000 fully assembled engines, a total of 35 engine derivatives are produced locally, the majority of which are used in the Ford Ranger and Everest, which are assembled at the Silverton Assembly Plant in Pretoria for domestic sales market and export to more than 100 markets globally. Engines are also exported to customer plants in North America, China, Russia, Turkey and Italy – the European plants fitting the 2.2 Duratorq TDCi engine to the Ford Transit.

Approximately 410 engines are assembled each day, five days per week using two shifts, with one engine coming off the line every two minutes.

The Struandale Engine Plant also machines cylinder heads, blocks and crankshaft for the Duratorq TDCi engine, with an installed capacity of up to 280 000 component sets per annum. Approximately 850 sets of components are machined per day. These are used for local engine assembly, and are exported to Ford engine assembly plants in Thailand and Argentina.