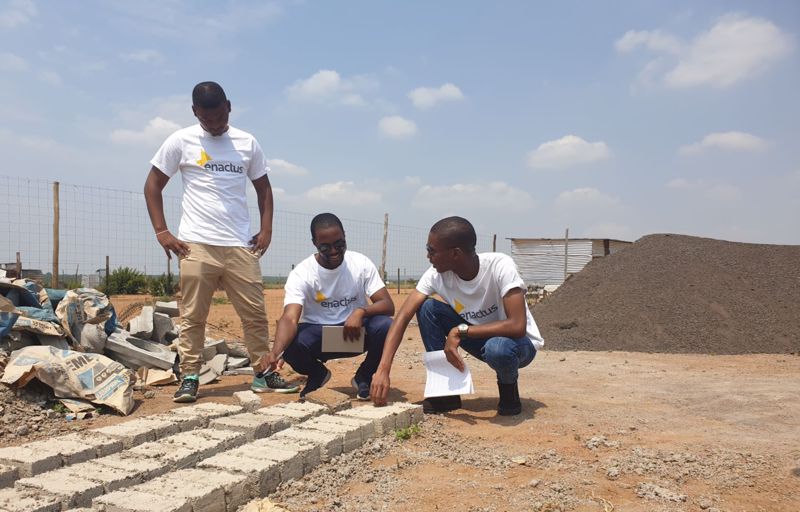 Heart for the World

Head for Business, Heart for the World

PRETORIA, South Africa, 04 February 2020 – In October 2018, the United Nations released a special report on the impacts of global warming. If we don’t cut emissions and stabilise the climate, the UN predicts a significant risk of increased and widespread environmental crises as early as 2040, including drought, floods, extreme heat, and poverty for hundreds of millions of already marginalised and vulnerable people.

Leading the charge to engage the next generation of entrepreneurial, values-driven social innovators in an effort to build a better, more sustainable world for all is international non-profit organisation, Enactus. With the guidance of academic and business leaders, and financial support from 550 corporate, organisational, and individual Enactus partners and donors, 72,000 university students in 37 countries around the globe participate in real-world projects which aim to tackle complex social and environmental challenges in local communities.

Ford Fund, the non-profit philanthropic arm of Ford Motor Company, is one of the top three corporate and organisational partners, contributing upwards of $1-million a year to the overall Enactus worldwide organisation and individual Enactus country operations. Grants are awarded to selected teams to implement their projects, often in partnership with organisations in local communities. Ford Fund has distributed more than $3-million in grants to support nearly 200 student-led projects to date.

“It is a true privilege for Ford, through our ongoing partnership with Enactus, to be able to play a role in the building of a better, more sustainable world,” says Neale Hill, managing director at Ford Motor Company of Southern Africa. “And it really is an honour to bear witness to the shaping of the next generation of entrepreneurial leaders and social innovators, with a head for business and a heart for the world.”

“Some of these projects really grow wings and fly, unlocking significant social, environmental, and financial opportunities,” he continues. “I think by now we’re all familiar with the ‘reduce, reuse, recycle’ mantra on a personal lifestyle level. But a couple of recent home-grown Enactus success stories prove just what can be achieved by small businesses which make use of recycled materials, and the far-reaching impact these sustainable, scalable operations have on both people and the planet.”

The {‘fi:niks} Soap Recycling Project was established by the Enactus Durban University of Technology (DUT) team. Thanks to the initiative, used bars of soap from guest rooms in 15 Durban hotels which would originally have been destined for landfill sites are now collected, recycled, and repurposed into liquid detergents.

To diversify their product offering, the Enactus DUT team also started producing virgin dish liquid and multipurpose cleaner products. Through support from the Ford Fund, they were able to scale the project and are now supplying six of their partner schools in the greater Durban area with products.

In March 2020, they will be launching a hygiene education programme within their existing feeding scheme at rural schools. Through an integrated approach, children will learn how proper handwashing with soap, combined with good nutrition, can not only help prevent common, contagious illnesses, but also benefit one’s growth and health.

To date, over 29,000 kg of soap – the equivalent of almost five bull elephants – has been collected. Over 120,000 litres of cleaning liquids – 1,500 full bath tubs’ worth – has been produced. And 28 sales agents have been hired for the distribution of these products.

The beneficiaries of this project are victims of domestic and gender-based violence, many of whom are temporary residents at the Durban Open Door Crisis Care Centre. Besides providing these vulnerable individuals with shelter and counselling during the healing process, the organisation also offers skills development programmes, such as training in sales and marketing by the Enactus team. When these survivors are ready to leave the shelter and return to their communities, they are able to sell the {‘fi:niks}soap products, generate an income, and become financially independent, which allows them to permanently exit the abusive relationships that they would often find difficult to escape from otherwise.

The Enactus University of Pretoria (UP) team launched the Phoenix Ash Brick Project, to link informal brick-makers with companies that produce fly-ash as waste during the manufacturing process. This unwanted residue is collected and used as the raw material in the manufacture of fly-ash bricks, which are stronger, lighter, and less costly to produce than clay bricks.

The Enactus UP team identified Mr Khoza, an informal brick-maker whose business was on the verge of closing down due to high input costs, as the initial beneficiary of this project. They introduced him to Isowall, a large polystyrene and panel manufacturer whose main factory is in Pretoria, catering for the insulation, construction, packaging, agricultural, and automotive markets. The company’s costs for disposal of the fly-ash through their production lines was high, and they agreed to supply their fly-ash waste to Mr Khoza at no charge.

This mutually beneficial partnership has already seen 408 tonnes of fly-ash – the equivalent of 68 elephants – diverted from landfill sites, equating to a reduction of 167,000 tonnes of greenhouse emissions. It has also created four new jobs at Mr Khosa’s operation, and he has seen an increase in his customer base. His bricks have been used to renovate houses in the community, and have even been used in the construction of a brand new church.

To learn more about Enactus and how you or your company can get involved in building a better, more sustainable world for all, please visit www.enactus.org