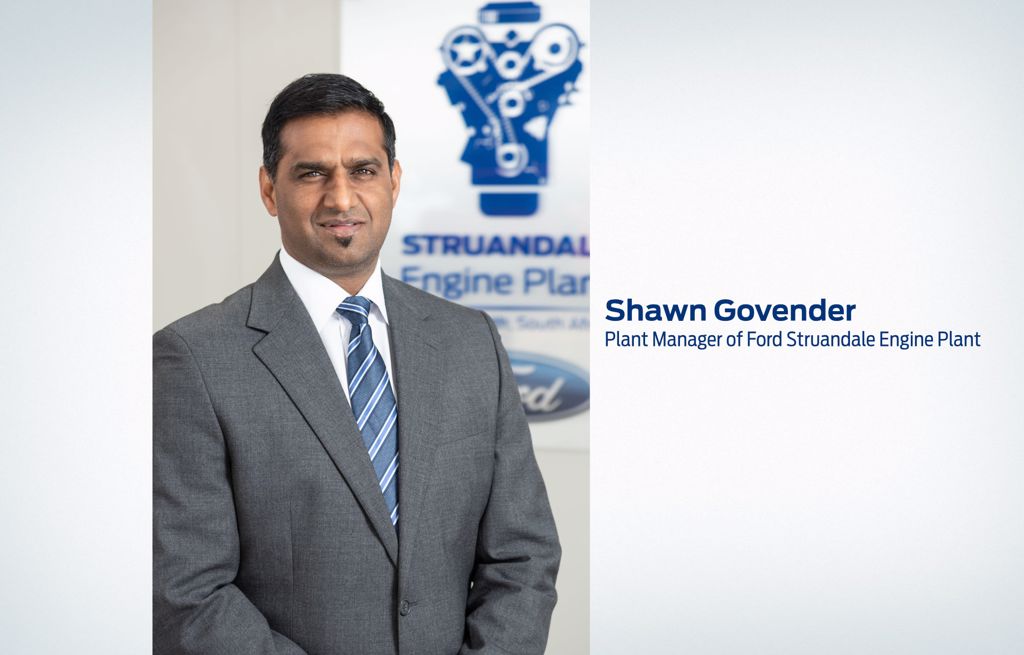 PRETORIA, South Africa, 23 January 2020 – Ford Motor Company of Southern Africa (FMCSA) has appointed Shawn Govender as the new Plant Manager of the Struandale Engine Plant in Port Elizabeth. Govender took over the reins in November 2019 from John Cameron, who was appointed to the position in 2014 and is currently on a sabbatical.

Govender has an established track record with Ford, having joined the company in 1996 as an Industrial Engineering Supervisor before being appointed as Production Manager a year later. Following extensive local and international training at Ford in the US, Germany and Thailand, he became the first representative from FMCSA to achieve Six Sigma Black Belt certification for lean manufacturing. He followed this up by achieving his Master Black Belt status – enabling him to play a key role in the improvement of business processes.

This led to him being promoted to Quality & Process Leadership Manager for two years, and then being appointed as Assistant Plant Manager at the Struandale Plant – a position he held for three years.

Thereafter, Govender joined General Motors as Plant Manager from 2006 to 2009, and subsequently held several senior positions within the automotive, manufacturing and mining industries, including Group Operations Director for Johnson Controls (2010-2011), Chief Operating Officer at Formex Industries (2011-2014) and, most recently, Group Manufacturing Director at Komatsu Mining before returning to Ford.

“We welcome Shawn back to Ford Motor Company, and wish him all the best with his appointment in this crucial role,” says Ockert Berry, VP Operations at FMCSA. “Shawn will be responsible for the daily operations of the Struandale Engine Plant, from production and manufacturing to driving continuous improvement, and working on securing new business for the Port Elizabeth operations.”

“I am really excited to be back at Ford,” Govender says. “Ford has evolved rapidly over the years, and the manufacturing technology level at the Struandale Engine Plant is truly astounding, which is phenomenal for the Eastern Cape.

“There are plenty of opportunities for new business from a global perspective, and my focus is to significantly drive safety, quality and efficiency improvements within the Struandale plant to make us a truly competitive global powertrain manufacturing facility,” he adds.

Govender has a B-Tech Industrial Engineering degree as well as his MBA – both completed at Nelson Mandela University (NMU). He is currently busy with his Doctorate at NMU, focusing on the Development of a Quality & Efficiency Improvement model for complex Manufacturing industries.

He lives in Port Elizabeth with his wife, Saras, and has two children.