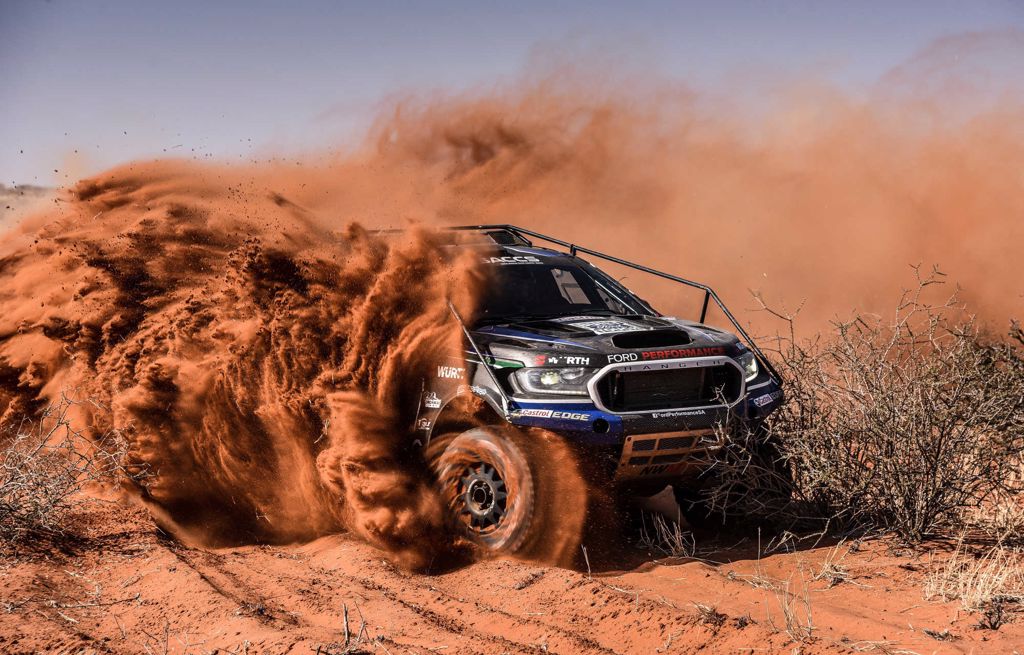 UPINGTON, South Africa, 21 June 2021 – It was an intense and action-packed three days of racing at this year’s gruelling 1 000km Desert Race – round three of the SA Cross Country Series (SACCS), held in Upington for the first time from 18 to 20 June. As the longest and toughest event on the calendar, the 2021 event lived up to its proven reputation of pushing the teams and vehicles to the absolute limit.

For the Ford Castrol Neil Woolridge Motorsport (NWM) team, it was also the first marathon race for the all-new EcoBoost twin-turbo V6-powered Ford Ranger, and its most arduous challenge yet – and they were rewarded with an impressive third-place finish for Lance Woolridge and Elvéne Vonk (334), who took their second podium of the year.

Opening the race route on Saturday’s first 170km loop proved a treacherous affair for Gareth and Boyd, though, as they picked up three punctures and dropped to eighth place by the time they returned to the pits for the mandatory service stop. Despite their best efforts to make up lost time, a couple of minor technical glitches on the second loop hampered them further, and they ended the day seventh overall.

Lance and Elvéne were among the many crews that suffered a single puncture on the first loop, and they set off on the second loop in fourth place, with just 2 min 35 sec separating them from the leaders. A clean run through the day’s remaining 170km section saw them cement fourth place overnight.

Sunday’s new 200km loop gave the determined pairing of Gareth and Boyd a chance to redeem themselves, and they proceeded to set the fastest overall time on the first loop, with several enthralling battles playing out amongst the top contenders. Sadly, it all came to nothing for Gareth and Boyd on the second and final stint when one of the drive belts on the engine snapped just 11km from the finish line, which also damaged the power steering belt. After more than an hour making emergency repairs, the young crew finally made it to the end in 13th place overall, and 10th in the FIA-class.

“It was a frustrating race for us, especially after winning qualifying on Friday,” Gareth says. “Being the first car on the road on Saturday definitely hurt us with the three punctures, and then we had an intercom issue and some other minor niggles that landed up costing us quite a bit of time.

“Boyd and I were quite surprised that we were quickest on Sunday’s opening loop as we weren’t pushing that hard,” he adds. “The second lap was even better, as we were really in the groove and the car felt amazing, so to have the belt issue so close to the end was disappointing. We still managed to finish which is some comfort, but after all the work we put in and setting fastest times, it is really disheartening.”

Lance and Elvéne, fortunately, had no issues during Sunday’s heat, and were constantly trading times with De Villiers/Murphy in the fight for the podium. A determined drive saw them finish a superb third overall behind winners Brian Baragwanath/Leonard Cremer (Century Racing) and Henk Lategan/Brett Cummings (Toyota), making it their second podium finish of the year after taking victory at the season-opening Mpumalanga 400.

“My objective for the weekend was to get to the finish and keep a steady pace, and I was really happy with our performance on Friday and Saturday,” Lance says. “We pushed hard during Sunday’s first loop, and Giniel and I each had a puncture. On loop two we managed to close right up on Giniel and pressurised him a bit, which resulted in him getting another puncture and we moved up a place to finish third. This is good for our championship, and we are very satisfied with how the weekend played out.”

“Overall I’m very happy with the results,” says team principal Neil Woolridge. “A win would have been better, but getting a podium finish, winning Friday’s qualifying and setting the fastest time on Sunday’s first loop is a fantastic achievement. The biggest thing for me is seeing how good our car is in seriously difficult conditions. We’ve had thick sand, rocks, thorns, dongas and heat, and our car has come out with flying colours.”

The NWM Ford Ranger privateers did the team proud by taking a clean sweep of the Class T podium at the Toyota Gazoo Racing 1000 Desert Race. Malcolm and Frans Kock (T4) had a faultless weekend, running second throughout Friday and Saturday, and ultimately progressing onto the top step for a popular win after the arduous and unforgiving 1 000km of competition.

They were joined in second place by Bernard Johnstone and Jan Harm Hugo (T22), with Wors Prinsloo and Andre Vermeulen (T41) recovering from a mechanical issue during qualifying to earn a third-place finish. Christo Rose and Arno Olivier (T58) were running fourth in class on Saturday, but a split radiator pipe ended their race prematurely. They were able to return to the action on Sunday and were rewarded with fifth place in Class T.

The Ford NWM Development Team of Bapi Rubuluza and Fanifani Meyiwa (T49) started Saturday in a commendable sixth place in Class T following a good qualifying performance, but sadly were forced to retire from the race after rolling their vehicle on the first loop. Both were uninjured in the incident.