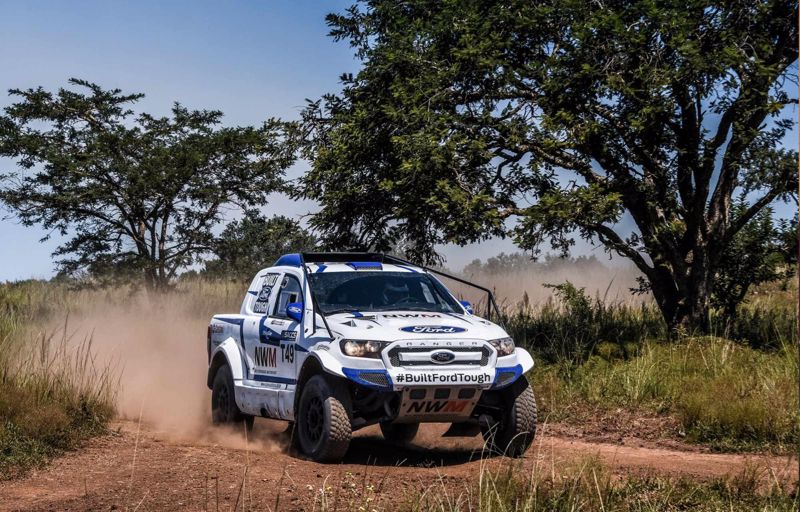 PIETERMARITZBURG, South Africa, 19 May 2021 – The recently announced Ford Neil Woolridge Motorsport (NWM) Development Team will make its debut at the Sugarbelt 400, round two of the South African Cross Country Series (SACCS), which takes place on 21 and 22 May 2021 in Eston, KwaZulu-Natal.

This initiative, which is funded by Ford South Africa and NWM – along with key partners and sponsors, and supported by Motorsport South Africa – aims to grow diversity in the traditionally exclusive and expensive field of motorsport. It was also conceived to generate new interest in the exciting world of cross country racing amongst aspiring drivers, navigators, technicians and fans.

The scope of the project has widened since the Ford NWM Development Team project was launched in March, with Baphumze (Bapi) Rubuluza joining the team as a driver, alongside co-driver Fanifani Meyiwa. Wiseman Gumede, who was originally touted to fill the driver’s seat, continues his development journey and learning the ropes.

“The South African Cross Country Series is a very exciting and growing formula, and having a development team is a fantastic opportunity to further raise the profile of the sport in South Africa,” says NWM team principal Neil Woolridge. “It also helps us bring new blood into the series, and create a broader spectrum of competitors, support crews and followers.

“Having had no prior motorsport experience, Wiseman has an extremely steep learning curve ahead of him in being able to master a powerful and very specialised V8-engined race car, so we’ve elected to continue the driver development process with him, and explore suitable avenues for him to gain the necessary skills and experience with a view to racing in the future,” Woolridge says.

As part of this journey, Gumede recently completed a specialised advanced driving course at Zwartkops Raceway in Pretoria, which gave him a far better understanding of car control and boosted his confidence behind the wheel. He has also completed several test sessions with the team. He remains part of the Ford NWM Development Team, and will attend races and support the rest of the crew while learning more about the series and the driving conditions, guided by team mentor Ward Huxtable.

Accordingly, starting at the Sugarbelt 400, the Ford NWM Development Team’s V8-powered Class T Ranger will be crewed by Bapi Rubuluza and Fanifani Meyiwa – neither of whom have competed at this level before, although both have motorsport experience.

“Bapi competed in regional rallying, then raced a Class E Ford Ranger from 2004 to 2007, and he had an impressive finishing record by completing all but two of the cross country events he entered,” Woolridge says. “He hasn’t competed for the past 14 years, and our 5.0-litre V8-powered, purpose-designed and built Class T Ranger is a far cry from the standard production Class E Rangers he was used to. However, we feel it is a great opportunity to get him in a world-class vehicle that won the Class T titles in 2018 and 2019, so it’s an exciting development opportunity for him.”

Rubuluza is thrilled at the chance to drive in Class T. “I really appreciate this opportunity from Ford and Neil Woolridge Motorsport to get behind the wheel of the Ranger V8, as I still follow the team closely and didn’t ever think that I would be driving one of these amazing vehicles,” he says.

“Having raced long ago in a standard production vehicle, you don’t just rock up and get in the Class T Ranger expecting to do well. My focus will be on looking after the car, getting mileage and growing into the team. I will use each race as an opportunity to learn and improve,” Rubuluza says.

Fortunately, the new driver and co-driver pairing are no strangers, having both been directly involved in each other’s respective motorsport efforts over the years. Meyiwa formed part of Rubuluza’s service crew in rallying, while roles were reversed during Meyiwa’s rally campaign as a navigator, where he won the 2018 KwaZulu-Natal regional title.

“For Fanifani, the Sugarbelt 400 will be his first foray into cross country racing, but his previous rally experience will certainly be an asset,” Woolridge says. “He will benefit from Bapi’s prior knowledge of the sport, and both of them will be able to draw on Ward’s vast experience as a multiple championship-winning co-driver and the team’s mentor.”

The Ford NWM Development Team will line up in Class T along with a strong contingent of Ford Ranger privateers supported by Neil Woolridge Motorsport. The 50km sprint qualifying race to determine the starting positions for the Sugarbelt 400 commences at 13:00 on Friday, 21 May. Saturday will see the crews tackling two 160km loops, starting at 08:00 and separated by a mandatory 30-minute service interval between the loops.

The Sugarbelt 400 remains closed to spectators according to the current COVID-19 restrictions. However, fans can follow all the action and track the position of the crews using the RallySafe app which can be downloaded free of charge for iOS and Android devices. Also, be sure to follow the Ford Performance SA social media channels, listed below, for regular race updates. (Source, Quickpic)