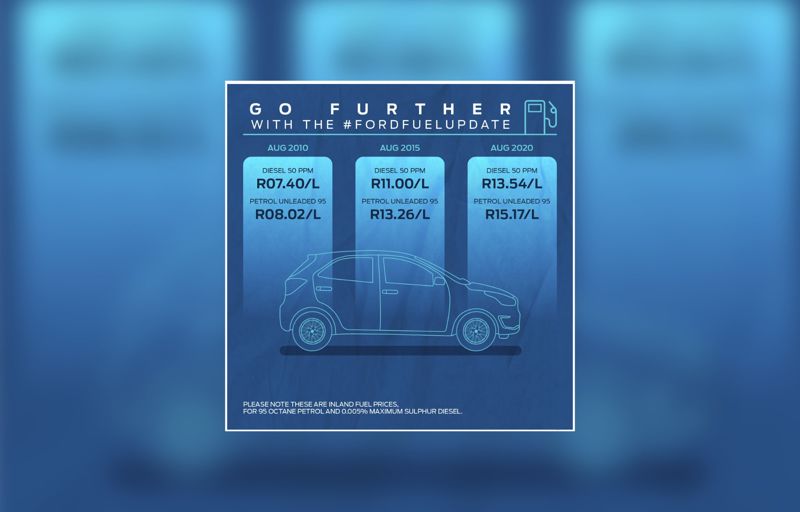 PRETORIA, South Africa, 04 August 2020 – South African motorists need to brace themselves for another fuel price increase this August, as confirmed by the Automobile Association of South Africa (AA). This is the second consecutive monthly increase in both diesel and petrol prices, and almost entirely wipes out the short-lived reprieve that very few motorists were able to enjoy during lockdown Level 5.

As from 5 August, petrol has increased by 5 cents a litre, and diesel by 45 cents per litre. This, according to the AA, is the result of the rising demand and price for oil following a 21-year record low caused by the sharp drop in demand worldwide during the various COVID-19 lockdowns. However, while it may seem like a disappointing case of back to normal for most motorists, there is optimism that stability is now creeping back into the market. This is largely due to the rand’s stronger footing against the dollar.

"Oil traded in a fairly tight range throughout July, but it saw a substantial climb at the beginning of the month, plus some recent volatility, that combined to push prices higher," the AA says. The rand gained eight cents against the US dollar during July and the average exchange rate has firmed to below R16.90. With so much negative news surrounding the economy, the rand's firmer trend is welcome.”

Without the rand’s good performance this month, the increases would have been higher.  "With the level of global economic turmoil that currently prevails, predicting a 'normal' band for oil is near-impossible; we advise motorists to be pragmatic about the possibility of further increases, and to plan their budgets accordingly," the AA concludes.

“The timing of the fuel increase is unfortunate now that the majority of South African motorists are returning to work and the extra financial burden weighs heavy amid economic difficulties brought on by COVID-19,” says Atloli Lesela, Brand manager for passenger cars at Ford Motor Company of Southern Africa (FMCSA).

Underneath the rugged and functional exterior of the Figo Freestyle is Ford’s proven 1.5-ltre Ti-VCT three-cylinder engine. Mated to its strong performance of 91kW and 150Nm is a claimed fuel consumption of 5.7l/100km*. A smooth-shifting manual gearbox provides substantial mid-range punch which is vital when trying to conserve fuel.

The Figo Freestyle manages to do all of this without sacrificing its impressive list of standard features.

Both Trend and Titanium models come with 15-inch wheels and a raised ground clearance to 190mm. This means that that potholes and other urban obstacles are mitigated. This extra styling rigour is further enhanced by roof rails and skid plates, as standard.  The Titanium series adds a reverse camera linked to the floating 6.5-inch colour display for the SYNC®3 system, which incorporates Bluetooth and voice activation that enables phone and audio functions to be controlled through intuitive voice commands. Owners can use their smartphone’s navigation functions and a variety of other apps in conjunction with SYNC®3 when seamlessly paired to Apple CarPlay or Android Auto.

“The All-New Figo Freestyle builds on Ford’s reputation as one of the pioneers of the utility vehicle segment,” says Atloli Lesela. “It fulfils the growing demand from younger buyers for a vehicle that is more compact and affordable than the compact SUV offerings. With the Figo Freestyle’s frugal economy, you will easily be able to drive to those outdoor destinations that its bodywork is designed for, once COVID-19 travel restrictions have lifted.” (Source, Quickpic)