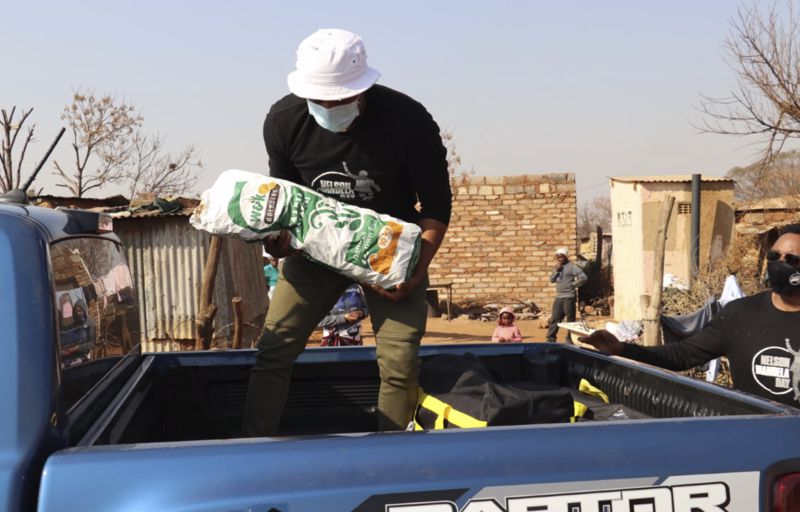 Ford and the Nelson Mandela Foundation Fight Hunger Together

PRETORIA, SOUTH AFRICA, 24 July 2020 – For many South Africans, Mandela Day which is celebrated annually on 18 July is no longer limited by 67 minutes of charity. It would not be an exaggeration to say that Mandela Day now holds a strong presence over the month of July – enough time for all to recognise their individual power and do something meaningful to change the world around them.

However, challenging circumstances related to the rapid increase in the number of recorded COVID-19 cases, required care and safety when reaching out to help those in need. The World Food Programme analysis suggests an additional 130-million people around the world could be pushed to the brink of starvation by the end of 2020 because of COVID-19.

“Food security is a critical issue in South Africa. The COVID-19 pandemic has increased the severity of the situation exponentially and many more South Africans will still fall under the food poverty and lower-bound poverty lines,” says Yase Godlo, Director of Mandela Day and Outreach. “Whilst there have been a number of interventions to provide food by the state, organised funds such as the Solidarity Fund, as well as efforts by private citizens and civil society organisations, it is clear that demand outstrips the supply of food to communities.”

Given the desperate food shortage, the Nelson Mandela Foundation, in collaboration with the Siya Kolisi Foundationand Imbumba Foundation, quickly established a food distribution programme. Under the banner of Each One, Feed One, the intention is to feed households across South Africa. With an initial contribution of R500 000, the model involves providing non-perishable food items for distribution to identified communities most in need of the relief. Healthy pre-packaged food parcels, including staple items like maize, rice, yeast, brown sugar and cooking oils, are combined with fresh fruit such as apples, oranges and butternut for a high-quality, nutritious diet.

Heeding the collective call of ubuntu, Ford Motor Company of Southern Africa (FMCSA) and the Nelson Mandela Foundation partnered for the month of July. Two Ford Rangers were allocated for use by the foundation to deliver essential food parcels across the country.

As Nelson Mandela so eloquently said, “What counts in life is not the mere fact that we have lived. It is what difference we have made to the lives of others that will determine the significance of the life we lead.”

With a combined payload capacity of over 1 400 kilograms, the Ford Rangers delivered 9 108 meals across eight provinces in quick time, even when the cross-country route saw main roads crumble away to gravel. This was not a concern for the Ford Ranger’s advanced 4x4 capabilities which easily tackled the conditions laid out before them. To the communities, the sight of the two Ford Rangers coming into view, regardless of the terrain, was a symbol of hope.

Across the eight provinces, 51 communities were reached by the Nelson Mandela Foundation. In many instances, beneficiaries of these food parcels were those who had been severely impacted by chronic illness and disabilities, as well as the elderly.

“Moments like these, where we are able to make a real, tangible difference in people’s lives, is so rewarding for everyone involved between Ford and the Nelson Mandela Foundation,” says Neale Hill, MD of FMCSA. “To work together during this COVID-19 crisis requires resilience and determination – characteristics that were emboldened by Nelson Mandela’s road to democracy.

“We are exceptionally proud to support this charitable initiative with the loan of the two Ford Rangers to the Nelson Mandela Foundation. Without the involvement and remarkable dedication of these organisations, the food parcels would not have reached the most vulnerable citizens of our country.”

The public is encouraged to participate through monetary donations to the Nelson Mandela Foundation, or to Given Gain. These funds will not only support with purchasing specific goods, but will also help with paying for structural needs in the distribution efforts.