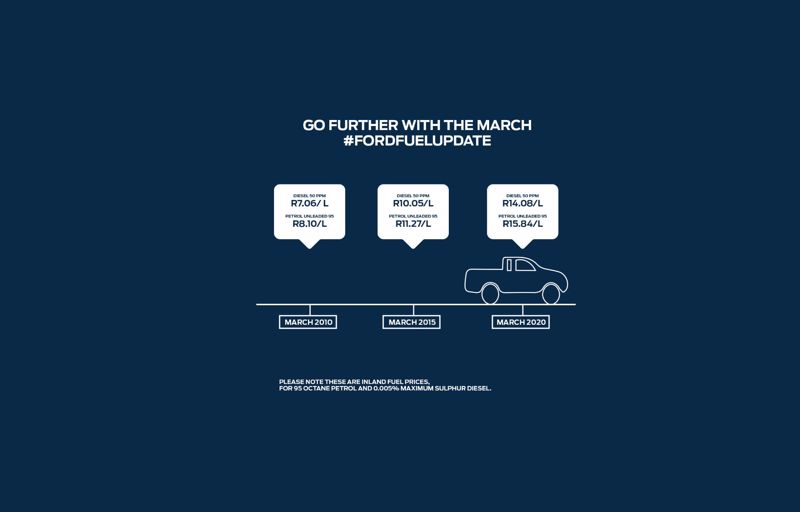 PRETORIA, South Africa, 4 March 2020 – Too much month at the end of your money? Don’t worry, you’re not alone. Consumers across all income groups are being stretched financially due to the rapidly rising cost of living, much of which can be attributed to the consistent rise in fuel prices every year. Not only do fuel price hikes affect travelling costs, but they also have a significant impact on the prices of food and all other commodities due to increased costs in the transportation and distribution links in the supply chain.

According to the Automobile Association, fuel levies account for almost 40 percent of every litre of fuel sold in South Africa. And although fuel prices have decreased slightly in March, the cost of filling up will rise once again in April as the next increase in fuel levies comes into effect.

“While you can’t control the price of fuel, you can control how you drive,” says Dale Reid, Product Marketing manager at Ford Motor Company of Southern Africa. “You need to be cognisant of the fact that a conservative driving style, and planning your journey ahead of time, can have a significant influence on the fuel economy and overall running costs of your vehicle.”

“If you’re in the market for a new car, it is crucial to factor fuel efficiency into your decision-making process,” he continues. “Sure, you can buy a cheaper second-hand car, say, five or 10 years old. But that car isn’t going to be nearly as fuel-efficient as a current model, because of all the cutting-edge technology that manufacturers keep pouring into new vehicles. Our latest generation Ford Ranger, and its outstanding performance in the recent WesBank Fuel Economy Tour, is a perfect case in point.”

The inaugural competition, held in partnership with FNB, took place in November 2019, and featured 40 entries from 12 manufacturers across various classes. Covering a total distance of 2 435km, over five days and widely varied terrain – from bustling cities to open highways and busy country roads – real-world fuel consumption of each vehicle was put under scrutiny.

The Ranger 2.0 Single Turbo Double Cab XLT 4x2, which is equipped as standard with the advanced new 10-speed automatic transmission – and was the only auto in its class in the competition – recorded an exceptional average fuel consumption of just 6.8 l/100km. This handed the Ranger, driven by Colin Mileman and navigator Henry Köhne, victory in the class for double cab pickups under 2 500cc, beating rivals from Toyota, Nissan, Mitsubishi, and Mahindra.

“Equipped with the advanced new 2.0-litre single-turbocharged four-cylinder diesel engine, which produces 132kW of power and a substantial 420Nm of torque, the Ranger has proven itself a solid bet for those looking for frugality, without compromising on performance,” Reid adds.

The 2.0-litre Bi-Turbo engine – as used in the Ranger Wildtrak and Ranger Raptor – delivers even greater performance, with 157kW and 500Nm on tap, yet is also capable of impressive fuel economy.

Along with the proven frugal nature of the new-generation 2.0-litre diesel engine, the high-tech new 10-speed automatic gearbox plays a crucial role in the fuel efficiency of the latest Ranger models.

“The cutting-edge 10-speed automatic transmission demonstrates how our gearbox technology has progressed in recent years, delivering the ideal combination of responsive performance, exceptional driving comfort and ease of use, as well as outstanding fuel consumption,” he concludes.

Look out for the April edition of this new monthly #FordFuelUpdate series, where Ford plans to help you stay abreast of your fuel spend and make better purchasing decisions in 2020.