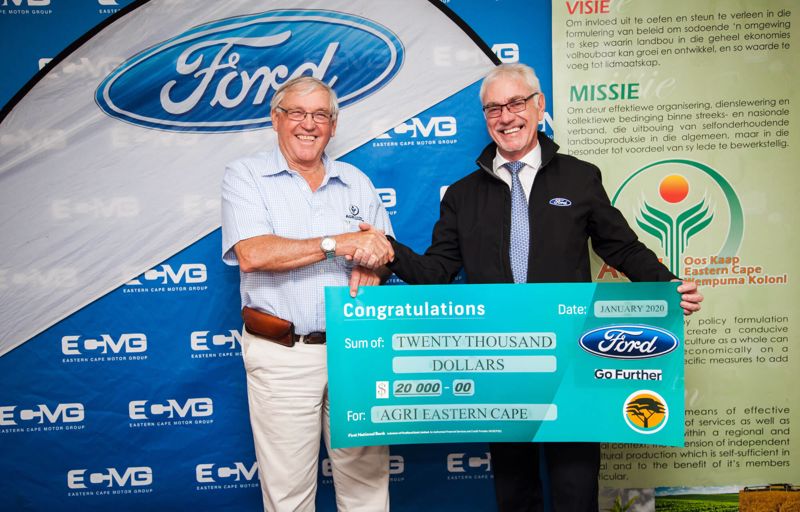 The Ford Fund grant, which is disbursed by non-profit organisation (NPO) Global Giving, will be used to assist with the procurement and distribution of hay bales and animal feed to farmers in the Eastern Cape who have been heavily impacted by one of the province’s most severe droughts on record – which is now in its sixth year and has resulted it being declared a drought disaster area.

“The devastating drought in the Eastern Cape is having a dire impact on the farming community, and they need every bit of support that we can muster,” says Neale Hill, MD of Ford Motor Company of Southern Africa. “The $20 000 grant from Ford Motor Company Fund, combined with the amazing fund-raising efforts by Eastern Cape Motors Ford, will help Agri EC in its efforts to assist the hardest-hit farmers.”

A request for disaster relief funding was submitted to the Ford Motor Company Fund by Eastern Cape Motors Ford William Moffett in Port Elizabeth. This followed a successful fund-raising initiative in the form of a fun 4x4 family day hosted by the dealership in November 2019. Over R240 000 was raised for this project, which included key local sponsors and partners LA Sport and Afrikaans radio station, Luister FM.

“In 2019, only around 30 percent of the normal average rainfall was recorded in the Eastern Cape, which has resulted in dams running dry,” says Doug Stern, President of Agri EC. “Several towns across the province have run out of water, and farmers are not able to irrigate crops or feed their livestock.”

According to Agri EC, it’s a desperate situation that threatens the livelihood of more than 2 000 commercial farmers, with thousands of small-scale emerging and subsistence farmers also in dire straits. Some of the most severely affected areas are around Steytlerville, Willowmore, Graaff-Reinet, Aberdeen, Jansenville, Queenstown and Cradock.

“The ongoing drought could result in the loss of up to 30 percent of the commercial farming sector, which will have a major impact on food security for the country,” Stern explains. “Farmers’ incomes have been cut by approximately 50 percent while expenses have tripled, and most farmers have been forced to reduce their livestock by more than half,” Stern explains.

“We are doing everything we can to assist the farming community, and without contributions of this magnitude from corporates such as Ford Motor Company and Eastern Cape Motors Ford, many of our farmers simply cannot survive,” he adds. “We are delighted to receive the $20 000 grant from Ford, and our farmers will be eternally grateful for the assistance.

“In total we received almost R530 000 from the Eastern Cape Motors Ford 4x4 day and the donation from Ford Fund, and this will go a long way to helping our farming community through this difficult period,” Stern says.

Alan Percy, Dealer Principal of Eastern Cape Motors Ford William Moffett, reiterated the crucial role that companies and individuals play in supporting farmers and towns affected by the drought. “It is vital for us as a community and as business to do whatever we can to assist our farmers. We are very happy that, together with LA Sport, Algoa Steel, NATCO, Luister FM, Extreme Adventures and Ford Motor Company, we were able to raise more than half a million rand for our local farming community, and we hope to be able to continue with this initiative on an annual basis.”

The Watergen system is capable of producing up to 900 litres per day, and is powered by a generator with both units mounted on a heavy-duty trailer, towed by a Ford Ranger Double Cab – thus ensuring the mobile unit is able to operate in any location. The two-year project is assisting 79 schools, four clinics, 50 early childhood development centres (ECDs) and an estimated 3 400 households, primarily in Uitenhage and KwaNobuhle near Port Elizabeth.