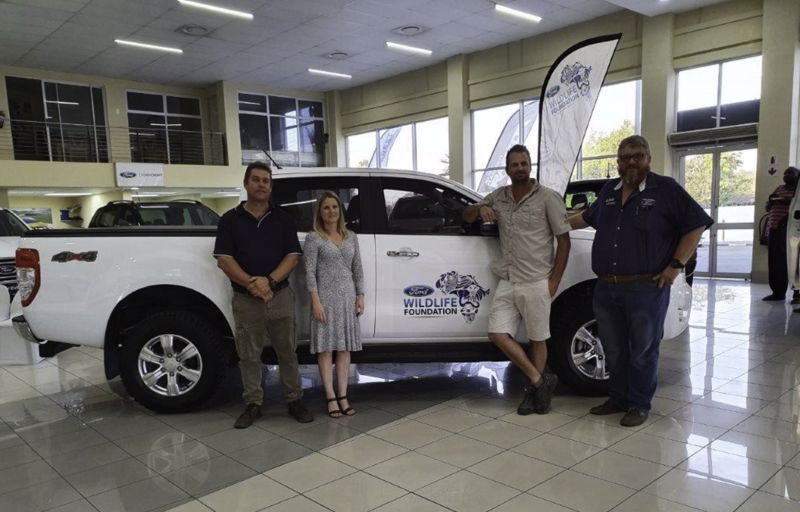 “The Ford Wildlife Foundation plays a crucial role in providing mobility for the wide-ranging and far-reaching conservation efforts across South Africa and its neighbouring countries,” says Neale Hill, MD of FMCSA. “We currently have 25 Ford Rangers on loan to wildlife and conservation non-profit organisations throughout the region. By providing these projects with the exceptionally capable Ford Ranger, we are indeed living up to our ‘Go Further’ brand promise by helping these dedicated organisations, teams and individuals to protect our precious natural resources for future generations.

“We are committed to making a positive difference through improving the lives of people, and strengthening the conservation of endangered animals and habitats. This is achieved by supporting education, research and conservation projects across Southern Africa,” Hill adds.

The Mabula Ground Hornbill Project was the first to receive their loan Ford Ranger this year, driving their efforts to protect the endangered Southern Ground-Hornbill. The Mabula project, which has been running for 19 years, operates in all four provinces where the Southern Ground-Hornbill occurs, comprising Limpopo, Mpumalanga, Eastern Cape and KwaZulu-Natal, with the population estimated to be only 400 family groups remaining.

Overberg Renosterveld Conservation Trust (ORCT) also received a Ford Ranger to assist the non-profit organisation in saving the last remnants of one of South Africa’s most endangered ecosystems. According to ORCT, the Renosterveld – located between Botrivier and Heidelberg in the Western Cape – boasts an exceptional variety of species, yet is teetering on the brink of functional extinction.

FWF also provided a Ford Ranger to the Southern African Foundation for the Conservation of Coastal Birds (SANCCOB) in Cape Town to assist the organisation in its efforts to rescue orphaned or injured seabirds, such as the endangered African penguin, Cape gannet, Cape cormorant and Bank cormorant.

The Carnivore Conservation Programme created by the Endangered Wildlife Trust (EWT) is now proudly powered by Ford too, as the Ranger pickup is used to protect and monitor South Africa’s most endangered carnivore – the African Wild Dog – which is listed on the International Union for Conservation of Nature (IUCN) Red List of Threatened Species.

Another exciting project adopted into the FWF fold is the establishment of a new 30 000-ha Grasslands Protected Area in the rugged northern region of the Eastern Cape. Coordinated by the World Wide Fund for Nature (WWF South Africa), the project site is located in an isolated inland area with many mountain passes and mostly dirt roads, including the famous Naudé’s Nek Pass which peaks at 2 590m, making it one of the highest passes in South Africa. It’s in these tough conditions where the Ford Ranger 4x4 excels, providing safe and dependable transport for the project teams.

“The Ford Rangers, which are proudly produced at our Silverton plant in Pretoria, prove that they are truly ‘Built Ford Tough’ by conquering some of the most remote and challenging terrains across the region that these teams face in their unwavering commitment to ensure the sustainability of our fauna and flora,” Hill states.

For over 30 years, Ford Motor Company of Southern Africa (FMCSA) has been actively involved in the conservation of wildlife and ecosystems in South Africa and Sub-Saharan Africa. To date, FMCSA has invested more than R40 million to support more than 170 conservation projects.

The Ford Wildlife Foundation is unique as it does not provide a cash donation to the conservation projects it supports, instead Ford’s partner organisations are equipped with Ford Rangers. The vehicles provided are used to help project operations, such as transporting field equipment, helping vets reach sick or poached animals, or translocating the animals themselves. The vehicles operating in all Ford Wildlife Foundation projects are monitored and serviced by Ford’s extensive dealer network to ensure they operate at peak efficiency.