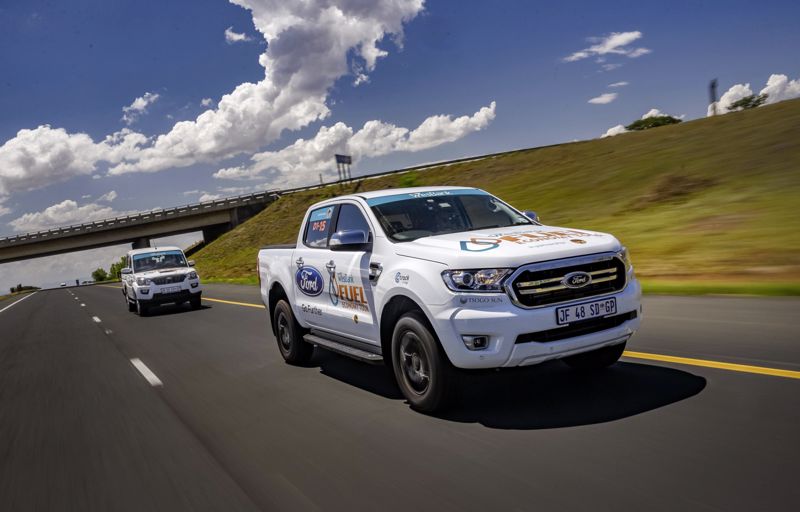 Pretoria, South Africa, 18 November 2019 –Ford’s ‘Go Further’ brand promise was translated into tangible results last week after the Ford Ranger and Ford Fiesta literally travelled further on less fuel and emerged as the most fuel-efficient vehicles in their respective segments during the inaugural WesBank Fuel Economy Tour in partnership with FNB. The Ford Kuga was a close second in the turbodiesel compact SUV segment.

The vehicles covered a total distance of 2 435 km over five days, featuring 40 entries from 12 manufacturers across various classes, testing the fuel economy of direct competitors in real-world driving conditions. The route started in Johannesburg on the 12th November 2019, and continued via Durban, East London, Port Elizabeth and George, eventually wrapping up in Cape Town on 16th November 2019.

The Ford Ranger, powered by the all-new 2.0 Single Turbo engine matched to the advanced, segment-defining 10-speed automatic transmission, proved its status as the most economical pickup in its segment over widely varied and challenging terrain – from bustling cities to open highways and busy country roads through the Eastern and Western Cape, all driven at normal everyday speeds.

Colin Mileman, a seasoned motoring journalist, was driving the Ranger, along with rally and cross country navigator Henry Köhne in the co-driver’s seat. The Ranger recorded an exceptional average fuel consumption of 6.8179 l/100km – in the process beating rivals from Mitsubishi, Nissan, Toyota and Mahindra.

“The performance of the New Ranger was simply remarkable,” Colin Mileman said at the prize-giving ceremony in Cape Town. “The all-new 2.0 Single Turbo is an outstanding engine, giving us all the power and torque we needed to conquer the steep uphills, while just sipping fuel.”

“Ford’s smooth and quick-shifting 10-speed automatic transmission definitely gave us the edge, and shows just how competitive this package is. To win this class as the only entry equipped with an automatic transmission, and for a two-ton pickup to record just 6.8 l/100km over the varied terrain, proves just how far engine and gearbox technology has progressed in recent years.”

“The results from the WesBank Fuel Economy Tour provide invaluable fuel consumption data for consumers to compare vehicles in the respective segments. It also demonstrates the economy that can be achieved when the vehicles are driven in the most fuel-efficient manner,” Mileman added.

The 1.0 EcoBoost engine Ford Fiesta, participated in the compact car segment and proved why it is a multiple Internation Engine of the Year winner. As part of the MOTUS Group Media Team, the Ford Fiesta competed in the class for turbocharged petrol engines below 1 100cc. Editor of Driven magazine, Lerato Matebese, and navigator Deon van der Walt took the class win with an average consumption of just 5.21 l/100km.

“I was mightily impressed by the Ford Fiesta 1.0 EcoBoost’s thrifty drinking habits over the past week’s sojourn, allowing us to win our class and finish ninth overall out of 40 participants in the maiden WesBank Fuel Economy Tour,” Matebese said. “This event is a great marketing tool for manufacturers.”

“I knew the Kuga 1.5 TDCi was good, but to achieve that fuel economy on the challenging roads we drove, while having to maintain the realistic speeds and stay within the allocated times for each section, was amazing,” Adams stated.