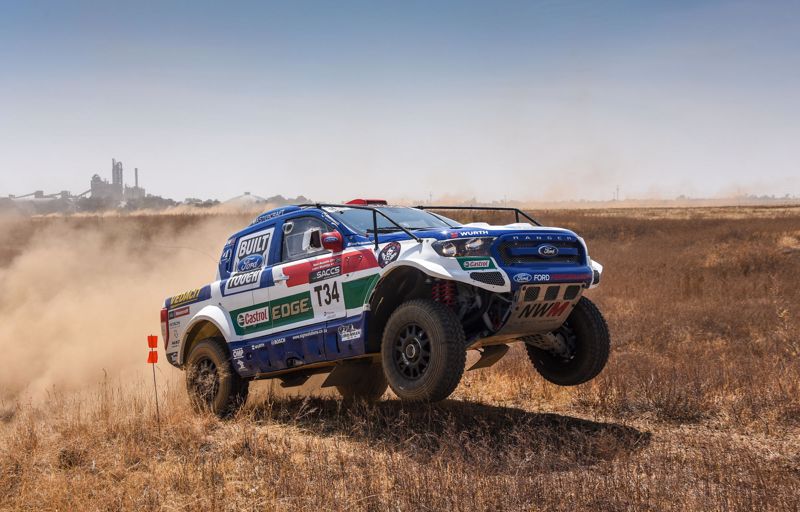 PIETERMARITZBURG, South Africa, 23 October 2019 - The Castrol Ford Cross Country Team of Lance Woolridge and Ward Huxtable wrapped up their second consecutive Class T title at the Lichtenburg 400 in September - yet they remain as committed as ever to ending the 2019 South African Cross Country Series (SACCS) on a high at the final round of the season, the Parys 400 which takes place on 1 and 2 November.

Having claimed five wins on a trot, Woolridge and Huxtable have been virtually untouchable this year. A second-place finish in Lichtenburg was the only time the talented duo haven't stood on the top step of the podium, although the result was more than sufficient to secure their second Class T title in a row in the Neil Woolridge Motorsport (NWM) designed and built Ford Ranger V8.

"We've had a superb season, and there will be no better way to finish off the year than by taking victory at the Parys 400," says Neil Woolridge, team principal of NWM. "It's a new event on the calendar, so it presents an exciting challenge for all of the teams."

While notching up another class victory will be the main objective, there's also a podium position at stake in the overall Production Vehicle championship. Going into the last round, Woolridge and Huxtable are currently placed second, just 31 points behind newly crowned overall Production Vehicle champions Henk Lategan and Brett Cummings in their FIA Dakar Rally-specification Toyota.

Despite competing in the lower-spec Class T category, the Ford pair are currently placed ahead of a trio of faster Class FIA Toyotas by virtue of their faultless performance throughout the 2019 season. They hold a five-point advantage over former Dakar champion Giniel de Villiers and co-driver Dennis Murphy in the second factory Toyota entry, and are 26 points ahead of Shameer Variawa/Juan Mohr. Chris Visser is 29 points adrift in the driver's rankings in his privately-run FIA Toyota.

"Besides their unbroken run of podium finishes throughout the year in Class T, Lance and Ward defied the odds in the second race in Botswana by winning the event overall and beating the FIA entries in the process," Woolridge senior adds. "A top-three finish in the overall Production Vehicle championship will be the perfect reward for their remarkable pace and consistency, as well as the exceptional work of the team as a whole this year."

Joining them once again in the starting line-up will be reigning Brazilian cross country champions Marcos Baumgart and Kleber Cincea in the second Castrol NWM Ford Ranger. The visitors have been strong contenders during each of their outings in the fiercely competitive SACCS this year, most recently earning a fourth place in Lichtenburg.

For motorsport fans, the Parys 400 presents an exciting opportunity to see the country's top racers in action - all within easy reach of the main hubs of the Gauteng, Free State and North West provinces. Located on the banks of the Vaal River, it should also attract plenty of interest from those that have made the town of Parys a popular weekend destination.

The Parys airfield will be at the heart of the event, serving as the designated service park (DSP), as well as the start and finish points for the race. The dust starts flying on Friday 1 November with a short sprint-style 45km qualifying loop that determines the starting order for Saturday's main race.

Competitors will complete two laps of the 180km main race loop on Saturday, starting at 08:00. Once the opening lap is completed, the crews have a compulsory 30-minute service break to conduct any repairs and refuel the cars. With the restart for the second loop only kicking off at 12:00, this is the ideal opportunity for spectators to visit the DSP and meet the teams.

According to the organisers, the route will incorporate a stadium section immediately after the start along the R59, then heads off in a southerly direction, passing under the N1 before turning east towards the farm Dover from where it will turn north-west to Weiveld Boerevereniging. From here it will again turn west under the N1 to return to the airfield. The route is expected to present competitors with a good combination of grazing and cultivated farmlands, along with some technical sections, a few rocky ridges and stream crossings - all of which will add to the challenge.

Fans can follow the action and track the position of the crews throughout the race using the RallySafe app which can be downloaded free of charge for iOS and Android devices.