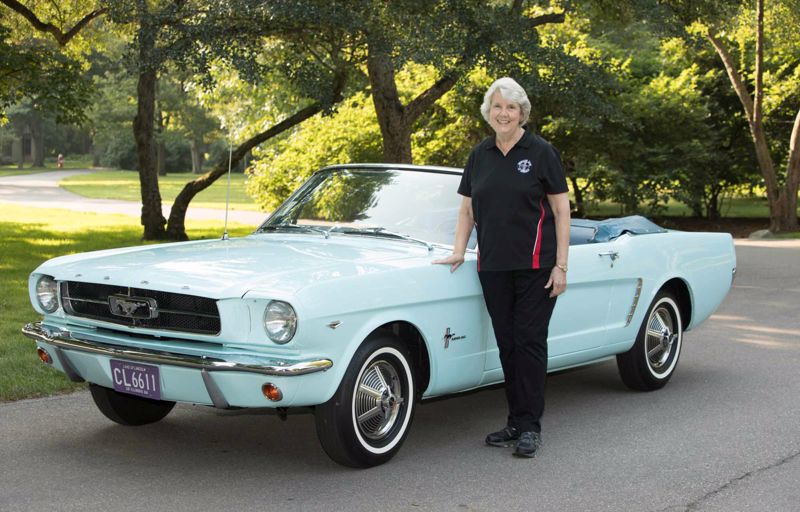 Love at First Sight – Women Who Made Ford Mustang History

PRETORIA, SOUTH AFRICA, 21 August 2020 – The old adage of never judge a book by its cover might be best described by Chicago resident Gail Wise who didn’t fit any of the usual muscle car archetypes. However, on 15 April 1964, Gail would, unbeknown to her, make worldwide history by becoming both the first Mustang owner and the first woman in the world to own a Mustang.

Gail instantly fell in love with a skylight blue convertible Mustang, partially hidden under a tarp at the back of her nearest dealership, and with her very first teacher’s pay cheque, bought the car two days before the official world premiere.

Her story, along with those of many others, have left such an indelible mark in Mustang’s iconic history that Ford Motor Company of Southern Africa has chosen to bring them back to life for women’s month this August.

Gail’s life at the time in a quaint Chicago neighbourhood was fairly ordinary, but at the wheel of the Mustang she was about to feel like a movie star. A college graduate about to enter her first job as a teacher, Gail needed transportation with only one criterion on her mind – it needed to be a convertible. “The dealership manager said he didn’t have a convertible on the floor but said I should follow him to the back of the dealership, as there’s something special,” she later said. Gail bought the baby blue Mustang on the spot for $3 400 and never looked back.

While many owners, upon realising this particular Mustang’s esteemed significance, would have immediately parked it safely away as a collector’s item or possibly consigned it to a museum, Gail used the car every day until little niggles eventually arrested its place on the road. It stood abandoned for 27 years!

Riddled with rust and a baby blue colour that had faded to a pale white, the very first Mustang was on the verge of being forgotten until 2005 when Gail and her husband decided to restore the car. Now this genesis of the Mustang nameplate is in good health, with the half-century patina loved by Mustang aficionados the world over.

Although South African businesswoman Kedibone Jozine Moloisane wasn’t yet born when Gail walked into her dealership, Moloisane’s sense of excitement as well as the daily salutes from other drivers echoes what Gail must have felt all those years earlier.

Having never owned a sportscar before, Kedibone bought a new 5.0-litre V8 Mustang from Lazarus Ford after spending time in her nephew’s similar car enroute to Mpumalanga. “I’ve been a fan of the Mustang from those early Vin Diesel movies, and from there I fell in love with the car. A Mustang is always a collectors’ item, and I will pass it down to my son and daughter who absolutely love it too. Since buying this car I can’t let go of it, it is the best decision I’ve ever made, and that sound is mighty!”

“It was breathtaking,” Kedibone said, when asked about the unusual colour choice. “My first preference was orange but the sales lady at Lazarus, after realising my outgoing personality, showed me this colour called Velocity Blue, and when I saw that colour I knew it was exactly what I wanted.”

While Gail has the honour of being the first woman on the planet to own a Mustang, driving one at over 300km/h also ratified South African journalist Jeanette Kok-Kritzinger into an illustrious set of records. Thirty-five years after Gail drove the first-ever Mustang off the showroom floor, Jeanette aimed a heavily-modified Mustang down a cordoned-off section of the N3, in 1999, with only one goal on her mind – to become the fastest woman in South Africa.

“It was my aim to set a Women’s Land Speed Record and by doing so, be an inspiration for women in motorsport. In the mid-nineties there were really only a few women participating in motorsport and I wanted to make South Africa aware of the fact that women could be involved in motorsport and that you have to follow your dreams,” she says.

Jeanette was already writing a name for herself across various national circuit racing championships, albeit in cars with much less power and running at far slower speeds than Peter Lindenberg’s Mustang (which Jeanette used for the record) would be capable of achieving.

This daunting juxtaposition in speed, size and power was apparent when Jeanette tested the Mustang at Lanseria Airport - although in retrospect nothing could adequately prepare her for 29 July 1999 when the prospect of being the fastest woman in South Africa rested in her hands.

Sharing the car with Lindenberg, Jeanette wielded the 550kW, 6-litre V8 Ford Mustang to a speed of 314.17km/h on her first attempt. Then within the hour, she pointed it in the opposite direction, as per the rules, and managed 301.07km/h, resulting in an average speed of 307.9km/h. It’s an extraordinary record that remains unbroken to this day.

These stories stand out as highlights but they are not isolated in Mustang’s decorated narrative with women. Around the world, including South Africa, women have followed in Gail’s footsteps, turning heads wherever their iconic Mustang takes them. (Source, Quickpic)